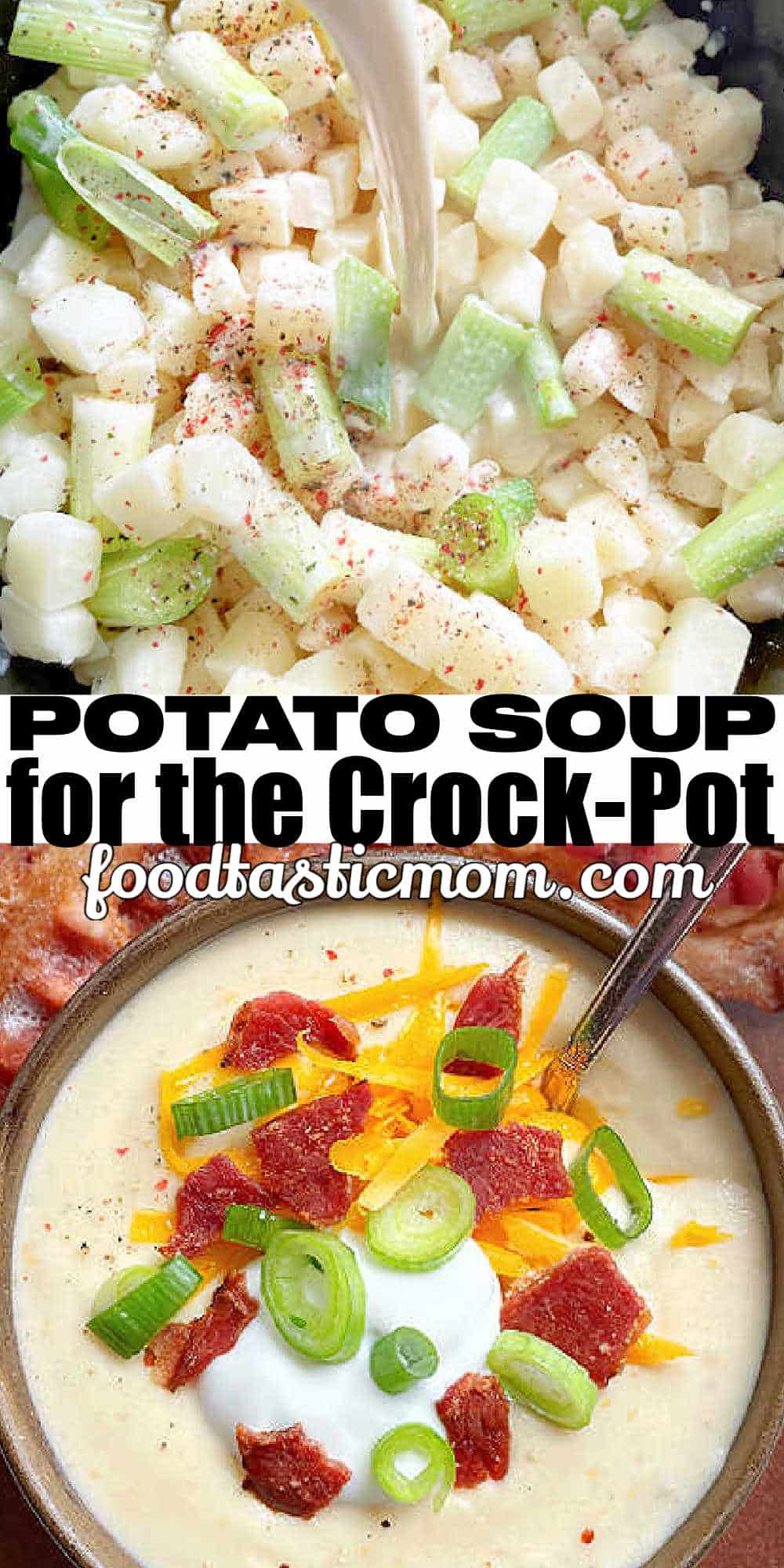 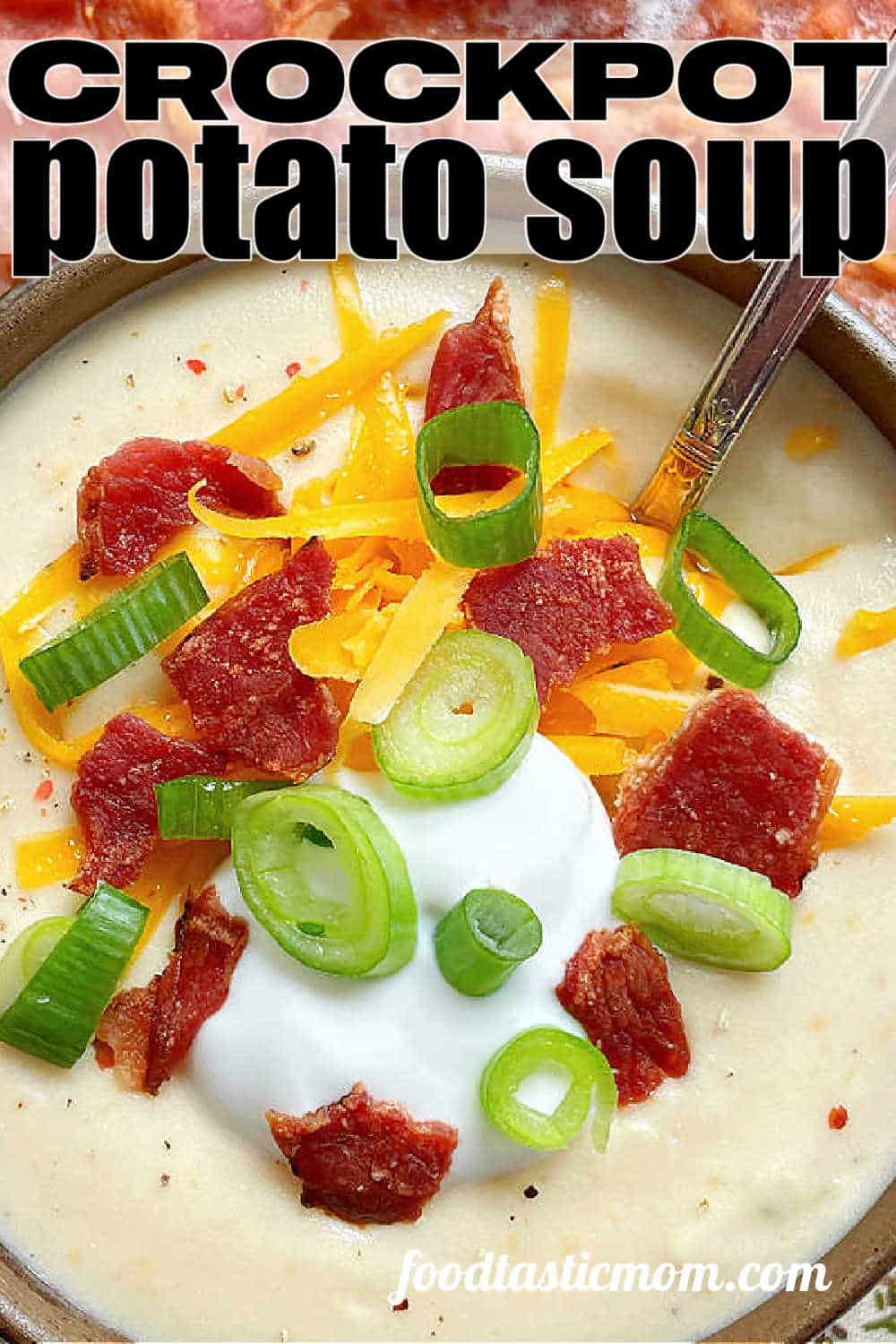 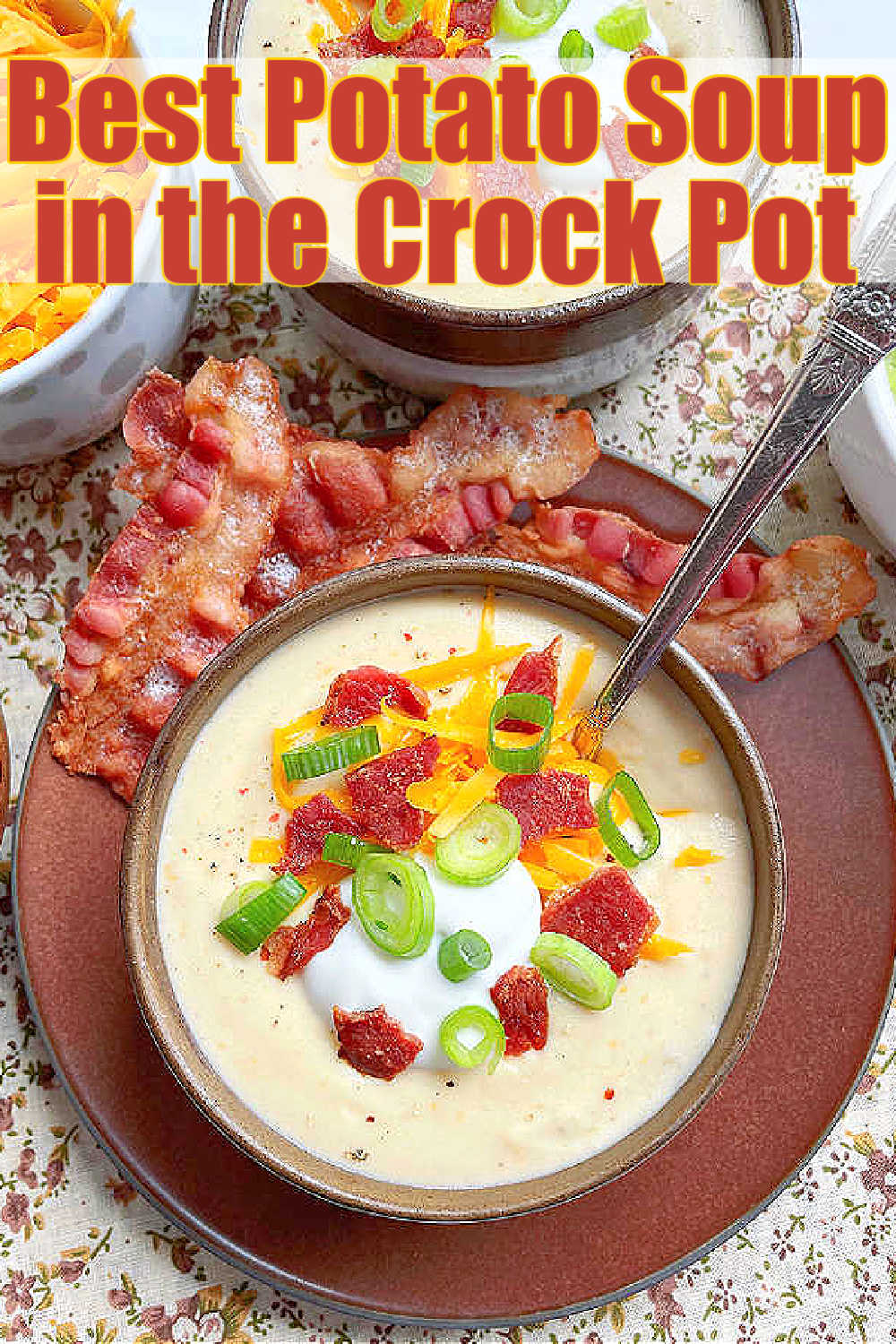 This is the potato soup of your dreams! My recipe for Potato Soup in the Crockpot combines frozen hash browns with a microwave roux for pure, creamy potato soup perfection! 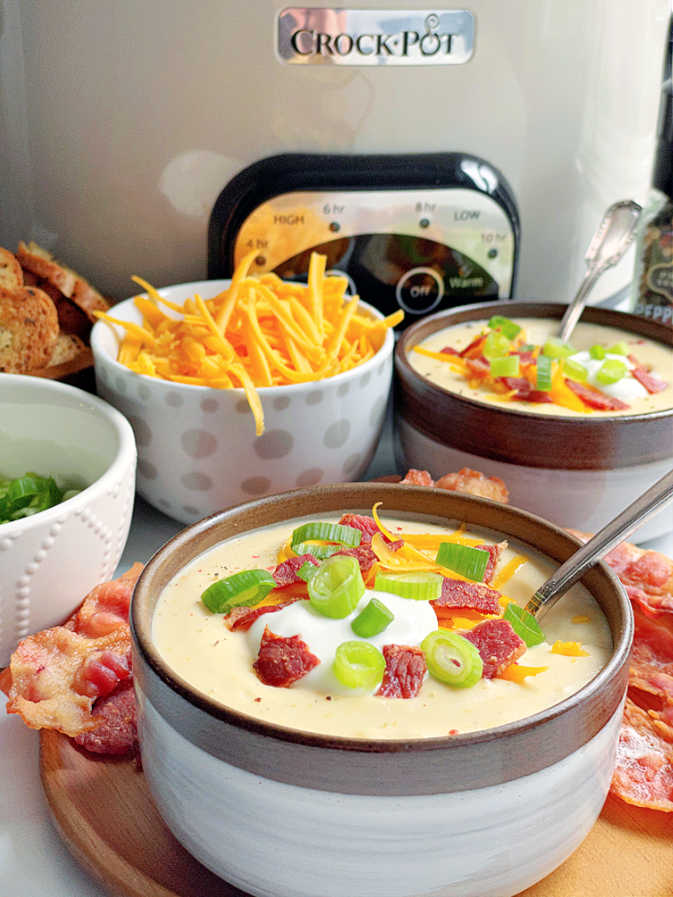 Since discovering how well a microwave roux thickens sauces and gravies in my Crockpot, I am rethinking a lot of my go-to recipe favorites. I’ve made a Loaded Baked Potato Soup recipe thanks to Cooking Light for years. My kids love it, and so do I. But it’s kind of (no really, it is) fussy to make the mashed potatoes first before making a soup. It’s not a quick recipe. But what I’m giving you now is definitely an easy Crockpot Potato Soup Recipe!

I know it sounds cliché, but my recipe really is a game changer. It’s completely unique when compared to other recipes for Crock Pot Potato Soup you’ll find when searching on Google. I promise you’ll never know this recipe starts with a bag of frozen hash browns. And the chicken broth + fat free half and half used to help thicken this soup creates the most luscious, creamy, and flavorful texture. It tastes rich and comforting, but the calorie count is reasonable. Put this soup in your dinner rotation right now. Your family will love you for it! 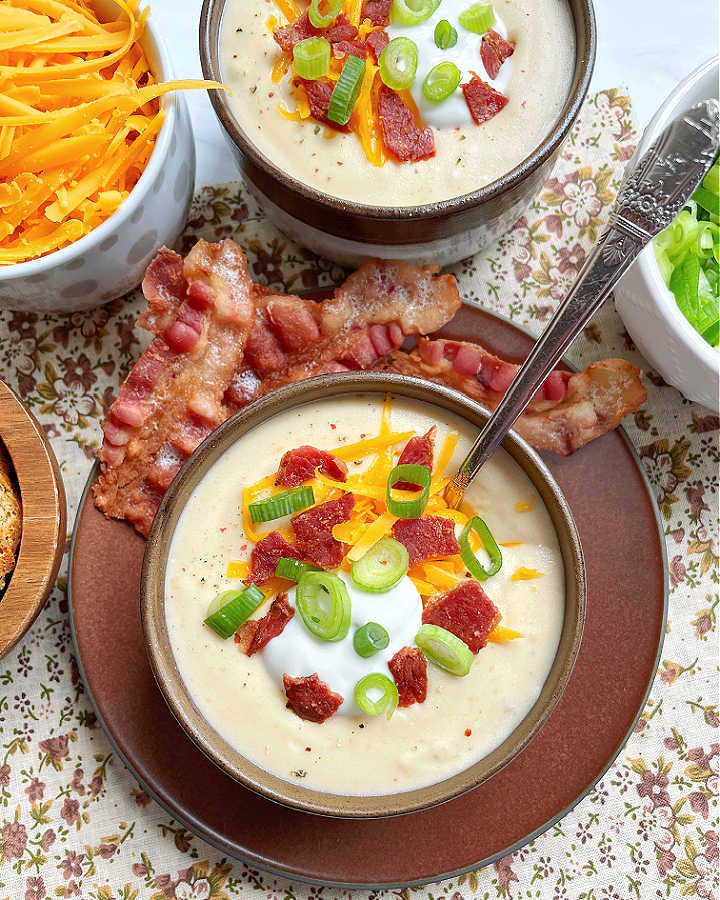 Why this recipe works

This is an easy recipe that uses just a few simple ingredients to create a comforting bowl of potato soup that everyone loves. Frozen hash browns combine with green onions, salt and pepper. Raw potatoes can be substituted. But I love the convenience of a bag of cubed hash browns. You won’t know the difference once it is cooked!

The broth thickens naturally in the slow cooker. It’s made with just butter and flour that are microwaved together to form a roux. Then whisked together with the best quality chicken stock you can find. And some fat free half and half to provide a rich and creamy texture without adding unnecessary calories.

Once everything has slow cooked to tender, sour cream and freshly shredded extra sharp cheddar cheese are stirred in for even more flavor. Puree it all together with an immersion blender. Then top your potato soup with cooked bacon, green onions, more sour cream and a sprinkle of extra cheese. It is pure comfort food!

Ingredients for Potato Soup in the Crockpot 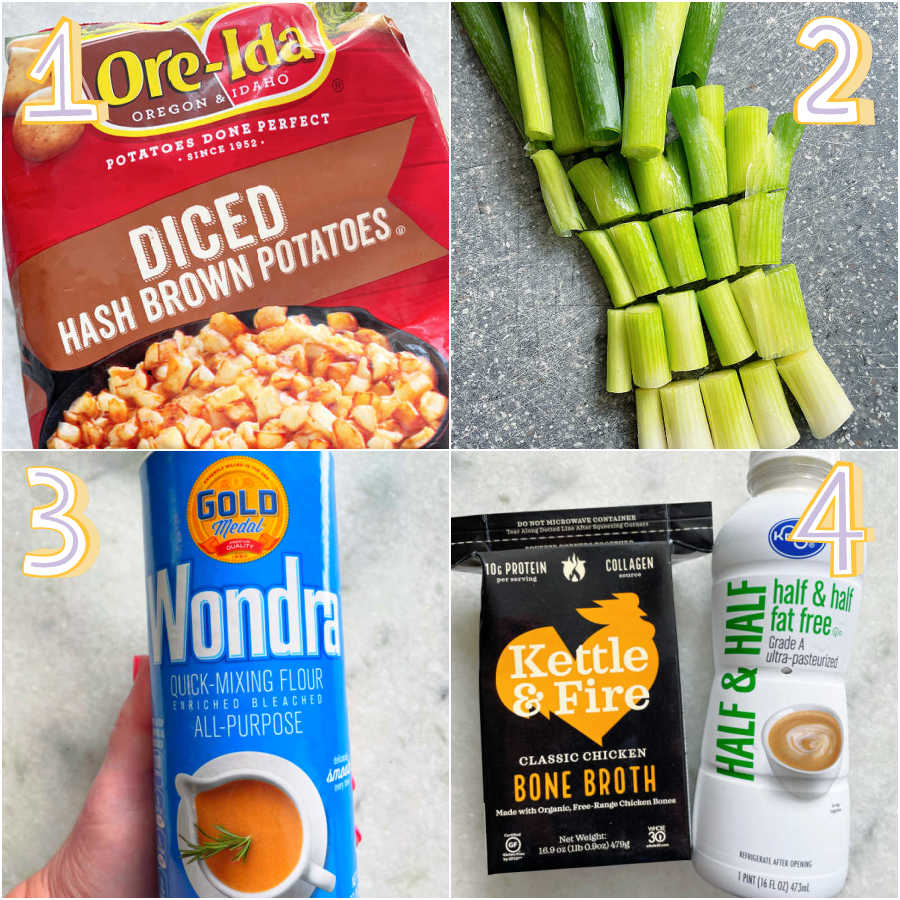 Instructions for How to Make Slow Cooker Potato Soup 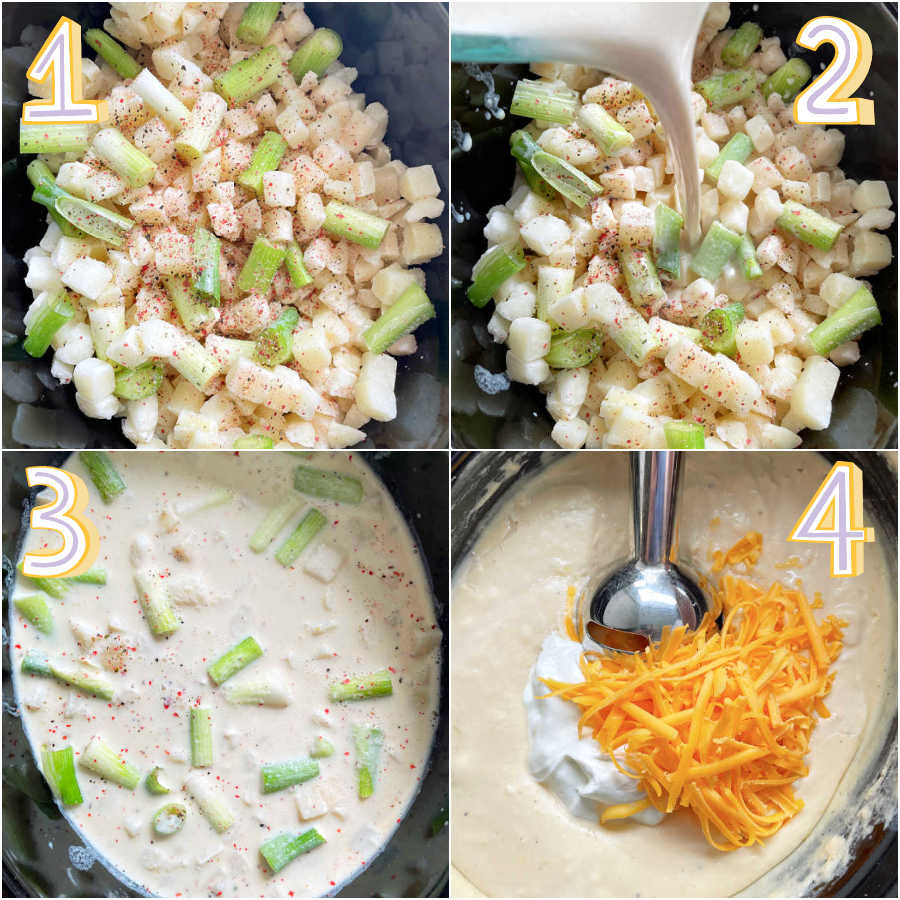 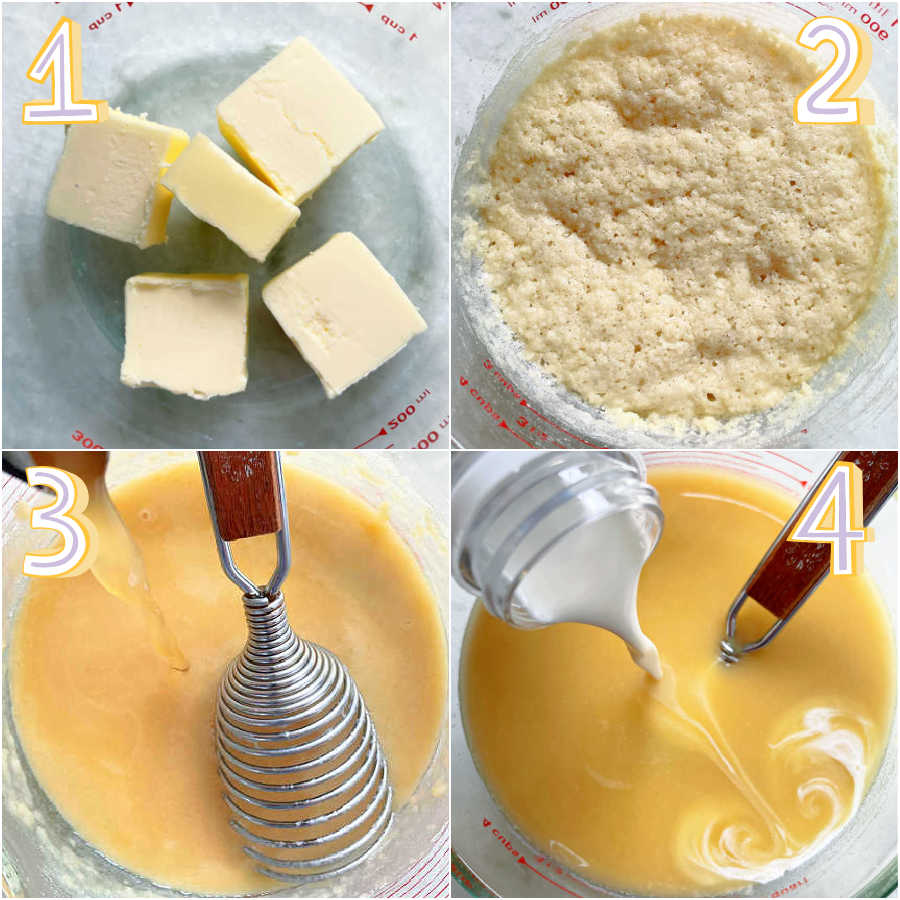 How do you thicken potato soup in the Crockpot?

With my method, you thicken potato soup with a microwave roux. Just two ingredients combined together, melted butter and all-purpose flour, are all you need for perfectly thickened soup. This roux works magic in a Crockpot!

How long does it take for potatoes to cook in a Crockpot?

About 4 hours on HIGH power or about 6 hours on LOW power. If I’m home to monitor my slow cooker, I’ll sometimes start the cooking process on high heat. And after a couple of hours, I’ll give it a good stir and finish on low heat.

Can you cook potatoes from raw in your slow cooker?

Yes! These hash brown potatoes are started from frozen. You can start peeled and chopped raw potatoes in a slow cooker and the cooking time will be about the same as for frozen potatoes.

Can you overcook soup in the Crockpot?

Actually you can. On high heat, my Crockpot seems to run quite hot. I have to monitor it and I prefer to use mine on low heat. Maybe that means it’s time for a replacement? But it is possible to overcook soup. So monitor your recipe accordingly, especially if you are reheating leftovers in the slow cooker. 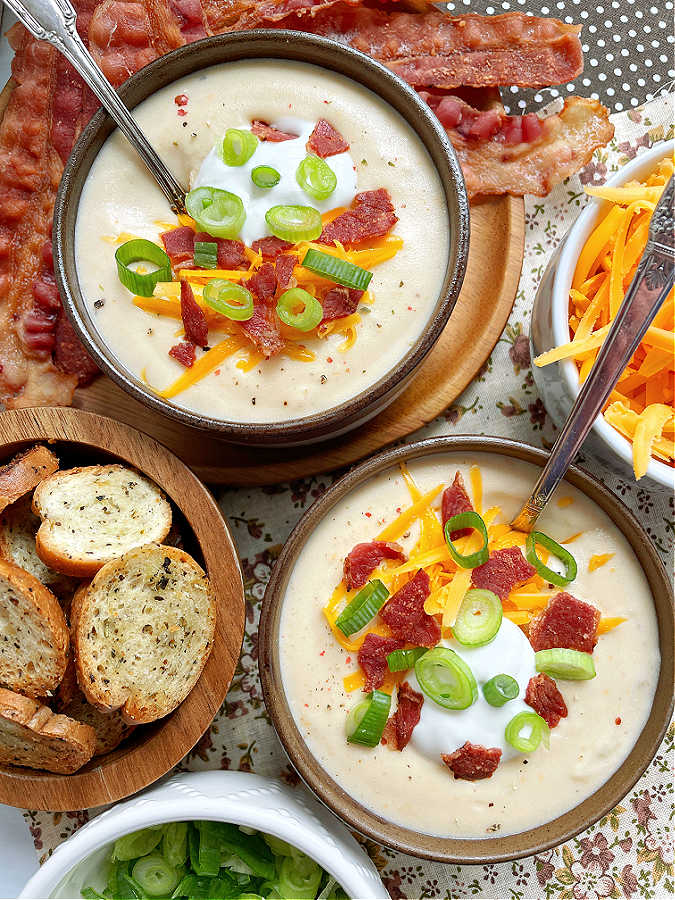 I love to serve this soup with sandwiches or a green salad. Here’s some of my favorite go-to recipes:

Store soup leftovers in an airtight container for up to three days in the refrigerator or up to one month in the freezer. I like to re-heat mine gently over low heat on the stovetop. Re-heating in the microwave works too. Add a little more chicken stock to your soup if the leftovers are too thick. Honestly this soup is almost more delicious the next day! 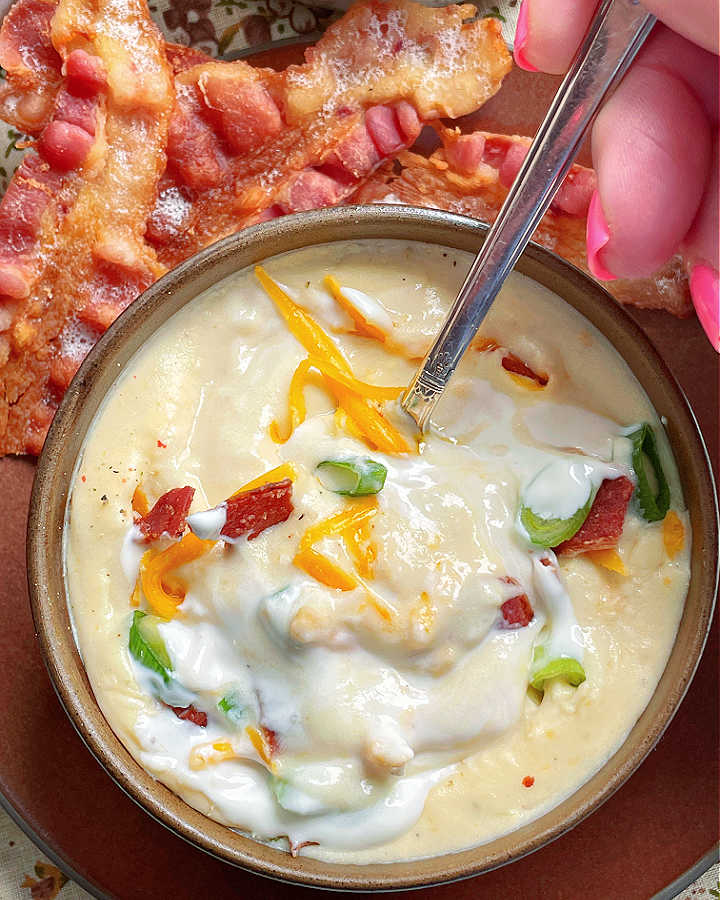 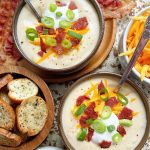 Potato Soup in the Crockpot